Stop me if you’ve ever heard this one, “My plan was all set, I was going to…” We’ve all been there, thinking that we know how things are going to work, how life will turn out and where we’ll be in one, five, ten years from now.  The same was true for Alexandra Arnold (Alex) who grew up in France (and has an awesome accent by the way).  She was following her dream to enter the tourism industry by applying for an internship in Glasgow, Scotland – and somehow ended up in Stowe, Vermont!

Over 20 years later, Alex is a true Vermonter, and proud business owner of Alma Coaching. Having a path that wasn’t entirely straight, and honestly is still full of curves and bends in the future, gives Alex the compassion and empathy that her coaching clients appreciate. It only takes a quick minute of checking out the reviews on her website to know that she connects with clients on a personal level that makes them feel safe enough to share. I only had the pleasure of talking with Alex for an hour, but her openness and willingness to share not only her path but her thoughts, fears, and dreams made it feel like we’ve known each other for years – which is exactly how a client should feel. 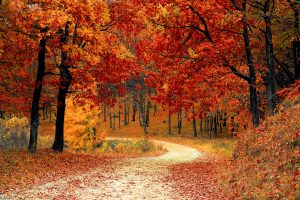 You must be asking yourself, “How did Alex go from the tourism industry to being a coach?” – Well, as I mentioned, the path wasn’t entirely straight. Let’s start back at the beginning. When Alex first arrived in Stowe, she interned at the International Institute for Peace through Tourism by helping them to plan a fall conference in Amman, Jordan that she wanted to attend. But attending that one event threw off her plans for returning to France and finishing up her schooling there. As Alex explained, in France they don’t break the year down into semesters, so she would have had to wait until the following fall to go back to school.

So, what’s a girl (in a foreign country) to do…get a job, meet a boy (unplanned!), and eventually transfer her studies to a local school – Johnson State College. At 24 years old, Alex got what she thought was her “dream” job: working as a walking tour operator at Country Walkers. What she realized over the 11 years of working there was that she felt a pull to the accounting, human resources, and training & development side of things, not the travel part (which made sense as she doesn’t really see herself as the adventurous type).

A lot of deep reflection happened during these years, which led to other realizations, a divorce, a move, and going back to school to get an M.S. in Human Relations and Organization Development and an M.S. in Psychology. Organizational Psychology is a specialized field that combines the business workplace “stuff” with psychology (helping people understand why they do what they do). The problem was, most people that had a career based on Organizational Psychology ended up working in large firms or as HR consultants – and due to another realization, that she is an introvert with High Sensory Sensitivity (a little-known trait even though it touches 20% of the population), she couldn’t imagine herself in such a public and collaborative position.  And then one day, someone happened to say that she should be a coach. She laughed it off because she couldn’t see it, but the seed was planted.  Her self-doubt had Alex wondering how anyone could possibly benefit from someone that had so many twists and turns on their road through life. Wasn’t a coach supposed to have all the answers and know exactly what the next step would be?

I’m not sure even today that Alex would acknowledge that I believe it’s the fact that her path wasn’t straight that gives her the empathy and compassion to understand her clients and their path. She talks about having to accept that her mind works in two ways: the first is part of her upbringing telling her that she needs to do things a certain way 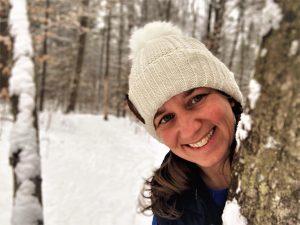 and once you make a decision, stick to it.  The other part tells her that it’s okay to do things differently, to be spontaneous, to trust your intuition and that you don’t have to find one thing or career to provide fulfillment.

Far from suggesting that plans, structure, and strategies are not valuable (to the contrary since as a coach, her primary role is to help clients identify what they truly want, and how they want to get there), Alex now understands that living based on “shoulds” is not productive. And what does that look like in Alex’s life? Well, she’s currently working three part-time jobs – she’s a Program Director for the Taos Institute, an educational non-profit, a bookkeeper (she couldn’t stay away from accounting) and she’s a personal development coach accredited by the International Coaching Federation. On top of all that, she’s raising her 12-year-old son. All of this helps her balance her need for stability and structure with her love for helping people grow and find fulfillment in creative ways (one-on-one, of course).

I asked Alex the typical coach question of “Where do you see yourself in 10 years?” Her very honest answer was that she really didn’t know and that it “makes sense to continue to explore and not lock myself in.” I also happened to ask if she was planning on specializing in a certain area of coaching, which made her laugh because she’d spent a lot of time taking tests, rationalizing and using her head to determine a niche (unsuccessfully), and then received a random email from a friend one day. It was an invitation to an online conference – The Activating Hope Summit by Jane Goodall – and it sparked Alex’s “lightbulb moment.” This was it — she had found something called Climate Coaching that would allow her to combine her coaching skills with her love of nature, while doing meaningful work. Alex doesn’t know exactly what she’ll be doing in the future but she knows that Climate Coaching and addressing Climate Anxiety are where her energy lies.  And, even though it’s uncomfortable, she’s following her intuition (rather than a thought-out strategy) and even recently launched “A Drop of Hope” – postcard-size emails to cheer up her followers on the topic of climate change. 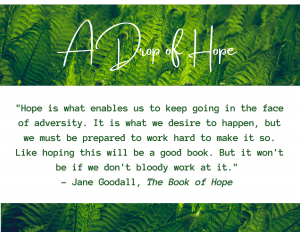 The Search for Community and WBON

You might be wondering where WBON fits in with all of this. As Alex said, she’s learning that you can find fulfillment from different sources. She gets the stability she needs from her job as a bookkeeper, she gets a sense of accomplishment and knowing she’s “doing good” as the Director for the non-profit (a remote position), and of course, personal fulfillment from working with her coaching clients. But Alex realized she didn’t have a community, which led her to researching organizations online. She eliminated many of them because of their vibe or a feeling of it not being a good fit. Then she found WBON. Her initial thoughts were that it was “very welcoming, very inspiring, and very laid-back.” Her first meeting happened to be our online holiday get-together, and she couldn’t believe that we were cutting out snowflakes! She said that was going to be hard to beat and that she knew she would find value in deepening the relationship. Her search was over. She joined, had the opportunity to present at a chapter meeting and to write one of the “She Owns It” blog posts, and has even gone hiking with a member she met at one of the chapter meetings. (A great idea for an in-person WBON event for the spring!)

I love that Alex is aware that we’re each always growing, and that there’s a way to combine science with our hopes and dreams (in her world it’s called positive psychology, and the approach she fell in love with and continues to inspire her is Appreciative Inquiry). And Alex’s coaching advice to us, gleaned from the Jane Goodall summit, “Do it out of love, not out of guilt.”

WBON members represent a diversity of industries, perspectives, and experiences. Be inspired by our Member Spotlight posts, an intimate look at one member, written by another WBON member. This month’s Member Spotlight was written by WBON Leadership Team member Christina Ubl, Clute Wealth Management